In this section, we explore integrals containing expressions of the form

where the values of

Before developing a general strategy for integrals containing

This integral cannot be evaluated using any of the techniques we have discussed so far. However, if we make the substitution

After substituting into the integral, we get

After simplifying, we have

At this point, we can evaluate the integral using the techniques developed for integrating powers of products of trigonometric functions. Before completing this example, let’s take a look at the general theory behind this idea.

we make the substitution

Let’s see why this actually makes sense. The domain of

Since the range of

there is a unique angle

or equivalently, so that

From this discussion, we can see that by making the substitution

To see how to do this, let’s begin by assuming that

It is useful to observe that the expression

actually appears as the length of one side of the triangle. Last, should

appear by itself, we use

The essential part of this discussion is summarized in the following problem-solving strategy.

The following example demonstrates the application of this problem-solving strategy.

Begin by making the substitutions

we can construct the reference triangle shown in the following figure. 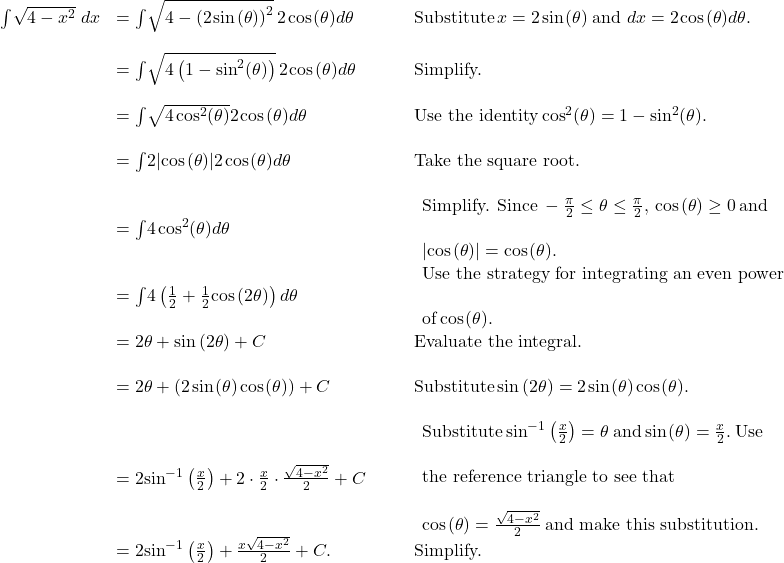 we can construct the reference triangle shown in Figure 3 below.

In the next example, we see that we sometimes have a choice of methods.

and then by using a trigonometric substitution.

In this case, the integral becomes

Using this substitution, we have

using the appropriate trigonometric substitution (do not evaluate the integral).

let’s first consider the domain of this expression. Since

is defined for all real values of

we restrict our choice to those trigonometric functions that have a range of all real numbers. Thus, our choice is restricted to selecting either

With this substitution, we make the assumption that

so that we also have

The procedure for using this substitution is outlined in the following problem-solving strategy.

and check the solution by differentiating.

Begin with the substitution

draw the reference triangle in the following figure.

To check the solution, differentiate:

for all values of

has a range of all real numbers, and

we may also use the substitution

to evaluate this integral. In this case, 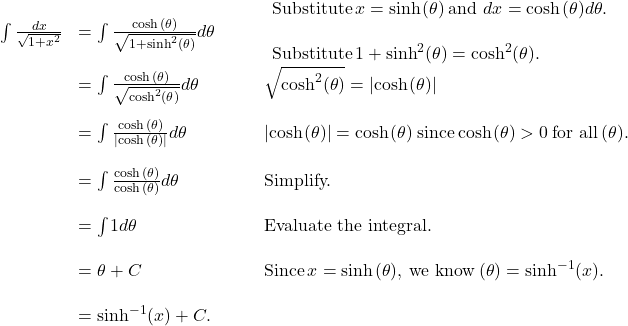 To see that the solutions are the same, set

After multiplying both sides by

and rewriting, this equation becomes:

Use the quadratic equation formula to solve for

it must be the case that

After we make the final observation that, since

we see that the two different methods produced the same solutions.

Find the length of the curve

the arc length is given by

To evaluate this integral, use the substitution

We also need to change the limits of integration. If

by using a substitution involving

The domain of the expression

Since these intervals correspond to the range of

it makes sense to use the substitution

The corresponding substitution for

The procedure for using this substitution is outlined in the following problem-solving strategy.

Finding the Area of a Region

Find the area of the region between the graph of

and the x-axis over the interval

First, sketch a rough graph of the region described in the problem, as shown in the following figure.

We can see that the area is

To evaluate this definite integral, substitute

We must also change the limits of integration. If

After making these substitutions and simplifying, we have 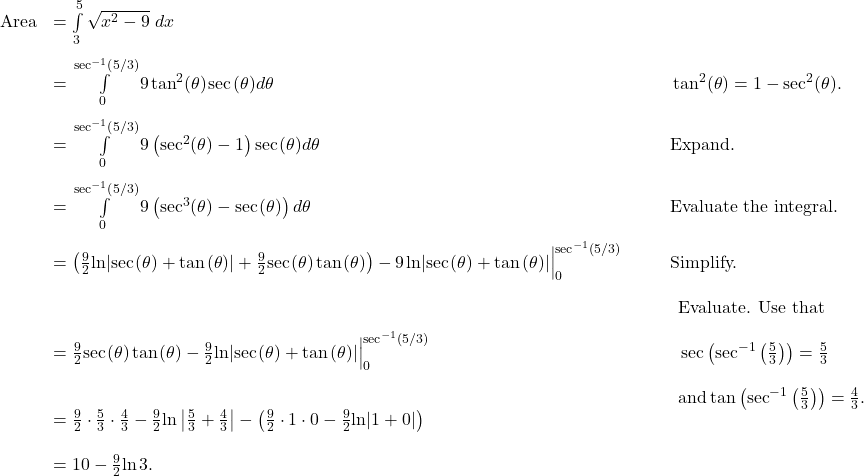 Simplify the following expressions by writing each one using a single trigonometric function.

Evaluate the following integrals using the method of trigonometric substitution.

(Hint: factor a power of

out of the root.)

(Hint: when factoring a power of

out of the root, be careful with the signs.)

In the following exercises, use the substitutions

Express the final answers in terms of the variable x.

Combine the technique of completing the square with a trignometric substitution to evaluate the following integrals.

area of a semicircle with radius 3

40. Find the area enclosed by the ellipse

and use trigonometric substitution. Are the answers the same?

; these answers are the same since

Next, evaluate the same integral using the substitution

Show that the results are equivalent.

Next, evaluate the same integral using

Are the results the same?

is the result using either method.

44. State the method of integration you would use to evaluate the integral

Why did you choose this method?

45. State the method of integration you would use to evaluate the integral

Why did you choose this method?

46. Find the area bounded by

47. During each cycle, the velocity v (in feet per second) of a robotic welding device is given by

where t is time in seconds. Find the expression for the displacement s (in feet) as a function of t if

48. An oil storage tank can be described as the volume generated by revolving the area bounded by

about the x-axis. Find the volume of the tank (in cubic meters).

49. The region bounded by the graph of

and the x-axis between

is revolved about the x-axis. Find the volume of the solid that is generated.

50. Find the length of the arc of the curve

51. Find the length of the curve

52. Find the area of the surface generated by revolving the curve

into a trigonometric integral