In this section we examine parametric equations and their graphs. In the two-dimensional coordinate system, parametric equations are useful for describing curves that are not necessarily functions. The parameter is an independent variable that both x and y depend on, and as the parameter increases, the values of x and y trace out a path along a plane curve. For example, if the parameter is t (a common choice), then t might represent time. Then x and y are defined as functions of time, and

can describe the position in the plane of a given object as it moves along a curved path.

Parametric Equations and Their Graphs

Consider the orbit of Earth around the Sun. Our year lasts approximately 365.25 days, but for this discussion we will use 365 days. On January 1 of each year, the physical location of Earth with respect to the Sun is nearly the same, except for leap years, when the lag introduced by the extra

The number of the day in a year can be considered a variable that determines Earth’s position in its orbit. As Earth revolves around the Sun, its physical location changes relative to the Sun. After one full year, we are back where we started, and a new year begins. According to Kepler’s laws of planetary motion, the shape of the orbit is elliptical, with the Sun at one focus of the ellipse.

Figure 1 above depicts Earth’s orbit around the Sun during one year. The point labeled

We can determine the functions for

thereby parameterizing the orbit of Earth around the Sun. The variable

is called an independent parameter and, in this context, represents time relative to the beginning of each year.

A curve in the

plane can be represented parametrically. The equations that are used to define the curve are called parametric equations.

If x and y are continuous functions of t on an interval I, then the equations

are called parametric equations and t is called the parameter. The set of points

Note that in this definition x and y are used in two ways. The first is as functions of the independent variable t. As t varies over the interval I, the functions

generate a set of ordered pairs

This set of ordered pairs generates the graph of the parametric equations. In this second usage, to designate the ordered pairs, x and y are variables. It is important to distinguish the variables x and y from the functions

Sketch the curves described by the following parametric equations:

Sketch the curve described by the parametric equations 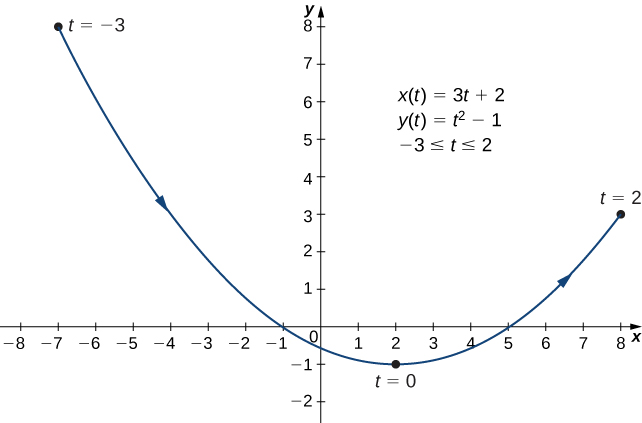 To better understand the graph of a curve represented parametrically, it is useful to rewrite the two equations as a single equation relating the variables x and y. Then we can apply any previous knowledge of equations of curves in the plane to identify the curve. For example, the equations describing the plane curve in Figure 4 are

This can be substituted into the first equation:

This equation describes x as a function of y. These steps give an example of eliminating the parameter. The graph of this function is a parabola opening to the right. Recall that the plane curve started at

These terminations were due to the restriction on the parameter t.

Eliminate the parameter for each of the plane curves described by the following parametric equations and describe the resulting graph.

Eliminate the parameter for the plane curve defined by the following parametric equations and describe the resulting graph.

This equation describes a portion of a rectangular hyperbola centered at 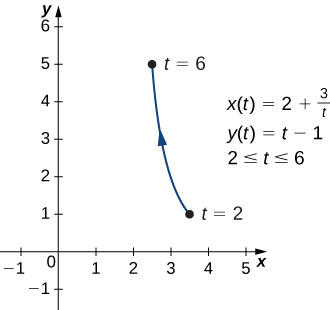 So far we have seen the method of eliminating the parameter, assuming we know a set of parametric equations that describe a plane curve. What if we would like to start with the equation of a curve and determine a pair of parametric equations for that curve? This is certainly possible, and in fact it is possible to do so in many different ways for a given curve. The process is known as parameterization of a curve.

First, it is always possible to parameterize a curve by defining

then replacing x with t in the equation for

This gives the parameterization

We have complete freedom in the choice for the second parameterization. For example, we can choose

The only thing we need to check is that there are no restrictions imposed on x; that is, the range of

is all real numbers. This is the case for

for x. This gives 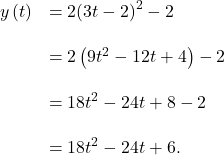 Therefore, the second parameterization of the curve can be written as

There are, in fact, an infinite number of possibilities.

Cycloids and Other Parametric Curves

Imagine going on a bicycle ride through the country. The tires stay in contact with the road and rotate in a predictable pattern. Now suppose a very determined ant is tired after a long day and wants to get home. So he hangs onto the side of the tire and gets a free ride. The path that this ant travels down a straight road is called a cycloid, see Figure 8 below. A cycloid generated by a circle (or bicycle wheel) of radius a is given by the parametric equations

To see why this is true, consider the path that the center of the wheel takes. The center moves along the x-axis at a constant height equal to the radius of the wheel. If the radius is a, then the coordinates of the center can be given by the equations

for any value of

Next, consider the ant, which rotates around the center along a circular path. If the bicycle is moving from left to right then the wheels are rotating in a clockwise direction. A possible parameterization of the circular motion of the ant (relative to the center of the wheel) is given by

(The negative sign is needed to reverse the orientation of the curve. If the negative sign were not there, we would have to imagine the wheel rotating counterclockwise.) Adding these equations together gives the equations for the cycloid.

Now suppose that the bicycle wheel doesn’t travel along a straight road but instead moves along the inside of a larger wheel, as in Figure 9 below. In this picture, the green circle is traveling around the blue circle in a counterclockwise direction. A point on the edge of the green circle traces out the red graph, which is called a hypocycloid.

The general parametric equations for a hypocycloid are

This fact explains the first term in each equation above. The period of the second trigonometric function in both

is related to the number of cusps (corners or pointed ends) on the graph, as illustrated in Figure 10. This ratio can lead to some very interesting graphs, depending on whether or not the ratio is rational. Figure 9 corresponds to

The result is a hypocycloid with four cusps. Figure 10 shows some other possibilities. The last two hypocycloids have irrational values for

In these cases, the hypocycloids have an infinite number of cusps, so they never return to their starting point. These are examples of what are known as space-filling curves.

Student Project: The Witch of Agnesi

Many plane curves in mathematics are named after the people who first investigated them, like the folium of Descartes or the spiral of Archimedes. However, perhaps the strangest name for a curve is the witch of Agnesi. Why a witch?

Maria Gaetana Agnesi (1718–1799) was one of the few recognized women mathematicians of eighteenth-century Italy. She wrote a popular book on analytic geometry, published in 1748, which included an interesting curve that had been studied by Fermat in 1630. The mathematician Guido Grandi showed in 1703 how to construct this curve, which he later called the “versoria”, a Latin term for a rope used in sailing. Agnesi used the Italian term for this rope, “versiera”, but in Latin, this same word means a “female goblin”. When Agnesi’s book was translated into English in 1801, the translator used the term “witch” for the curve, instead of rope. The name “witch of Agnesi” has stuck ever since.

The witch of Agnesi is a curve defined as follows: Start with a circle of radius a so that the points

are points on the circle (Figure 11). Let O denote the origin. Choose any other point A on the circle, and draw the secant line OA. Let B denote the point at which the line OA intersects the horizontal line through

Witch of Agnesi curves have applications in physics, including modeling water waves and distributions of spectral lines. In probability theory, the curve describes the probability density function of the Cauchy distribution. In this project you will parameterize these curves.

Student Project: Travels with My Ant — The Curtate and Prolate Cycloids

Earlier in this section, we looked at the parametric equations for a cycloid, which is the path a point on the edge of a wheel traces as the wheel rolls along a straight path. In this project we look at two different variations of the cycloid, called the curtate and prolate cycloids.

First, let’s revisit the derivation of the parametric equations for a cycloid. Recall that we considered a tenacious ant trying to get home by hanging onto the edge of a bicycle tire. We have assumed the ant climbed onto the tire at the very edge, where the tire touches the ground. As the wheel rolls, the ant moves with the edge of the tire, see Figure 12 below.

denote the position of the ant, we note that

Note that these are the same parametric representations we had before, but we have now assigned a physical meaning to the parametric variable t.

represent the position of the center of the wheel and

represent the position of the ant.

For the following exercises, sketch the parametric curves by eliminating the parameter t. Indicate the orientation of the curve. 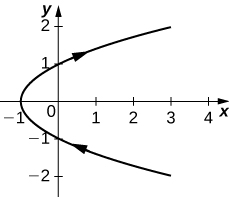 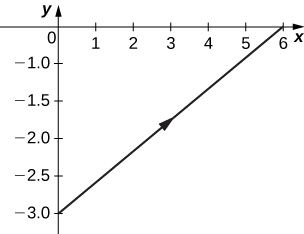 For the following exercises, eliminate the parameter and sketch the graphs. 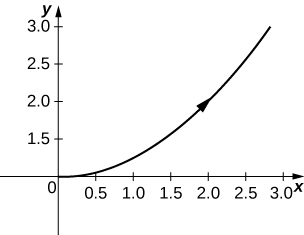 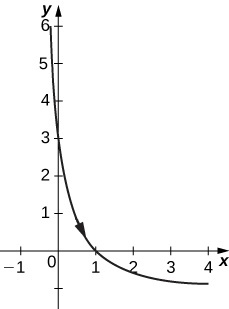 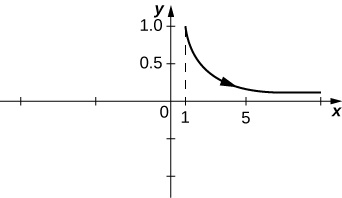 For the following exercises, sketch the parametric curves by eliminating the parameter. Indicate the orientation of the curve. 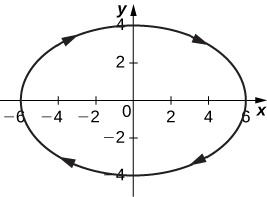 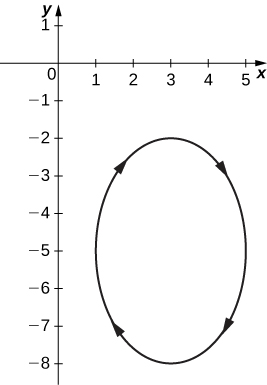 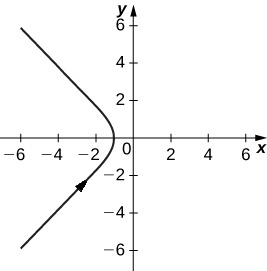 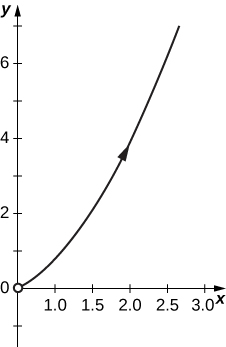 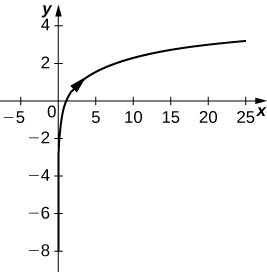 quarter of a circle

half of a parabola

represents the equation of a circle.

45. Use the equations in the preceding problem to find a set of parametric equations for a circle whose radius is 5 and whose center is

For the following exercises, use a graphing utility to graph the curve represented by the parametric equations and identify the curve from its equation.

The equations represent a cycloid. 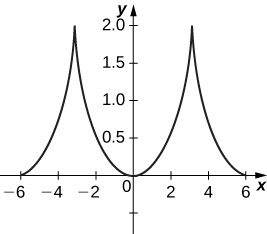 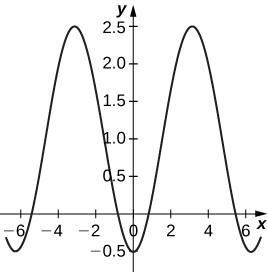 49. An airplane traveling horizontally at 100 m/s over flat ground at an elevation of 4000 meters must drop an emergency package on a target on the ground. The trajectory of the package is given by

where the origin is the point on the ground directly beneath the plane at the moment of release. How many horizontal meters before the target should the package be released in order to hit the target?

50. The trajectory of a bullet is given by

51. [T] Use technology to sketch the curve represented by 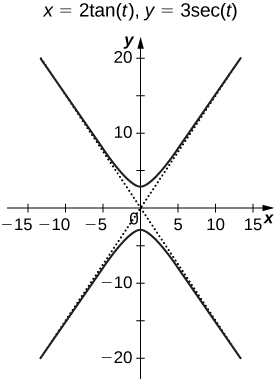 54. [T] Use technology to sketch the spiral curve given by 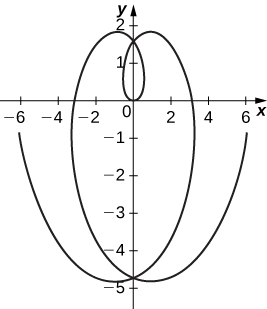 55. [T] Use technology to graph the curve given by the parametric equations

This curve is known as the witch of Agnesi.

56. [T] Sketch the curve given by parametric equations 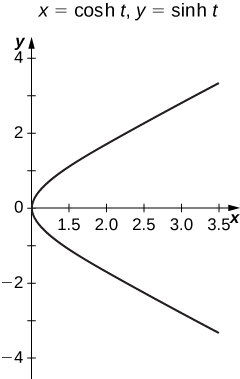 cusp
a pointed end or part where two curves meet

parameter
an independent variable that both x and y depend on in a parametric curve; usually represented by the variable t

parametric curve
the graph of the parametric equations

combined with the equations

that define a parametric curve