A balanced chemical equation provides a great deal of information in a very succinct format. Chemical formulas provide the identities of the reactants and products involved in the chemical change, allowing classification of the reaction. Coefficients provide the relative numbers of these chemical species, allowing a quantitative assessment of the relationships between the amounts of substances consumed and produced by the reaction. These quantitative relationships are known as the reaction’s stoichiometry, a term derived from the Greek words stoicheion (meaning “element”) and metron (meaning “measure”). In this module, the use of balanced chemical equations for various stoichiometric applications is explored.

The general approach to using stoichiometric relationships is similar in concept to the way people go about many common activities. Food preparation, for example, offers an appropriate comparison. A recipe for making eight pancakes calls for 1 cup pancake mix,

cup milk, and one egg. The “equation” representing the preparation of pancakes per this recipe is

If two dozen pancakes are needed for a big family breakfast, the ingredient amounts must be increased proportionally according to the amounts given in the recipe. For example, the number of eggs required to make 24 pancakes is

Balanced chemical equations are used in much the same fashion to determine the amount of one reactant required to react with a given amount of another reactant, or to yield a given amount of product, and so forth. The coefficients in the balanced equation are used to derive stoichiometric factors that permit computation of the desired quantity. To illustrate this idea, consider the production of ammonia by reaction of hydrogen and nitrogen:

This equation shows ammonia molecules are produced from hydrogen molecules in a 2:3 ratio, and stoichiometric factors may be derived using any amount (number) unit:

Moles of Reactant Required in a Reaction How many moles of I2 are required to react with 0.429 mol of Al according to the following equation (see (Figure))?

Aluminum and iodine react to produce aluminum iodide. The heat of the reaction vaporizes some of the solid iodine as a purple vapor. (credit: modification of work by Mark Ott)

Solution Referring to the balanced chemical equation, the stoichiometric factor relating the two substances of interest is

Check Your Learning How many moles of Ca(OH)2 are required to react with 1.36 mol of H3PO4 to produce Ca3(PO4)2 according to the equation

Number of Product Molecules Generated by a Reaction How many carbon dioxide molecules are produced when 0.75 mol of propane is combusted according to this equation?

Solution The approach here is the same as for (Figure), though the absolute number of molecules is requested, not the number of moles of molecules. This will simply require use of the moles-to-numbers conversion factor, Avogadro’s number.

The balanced equation shows that carbon dioxide is produced from propane in a 3:1 ratio:

Using this stoichiometric factor, the provided molar amount of propane, and Avogadro’s number,

Check Your Learning How many NH3 molecules are produced by the reaction of 4.0 mol of Ca(OH)2 according to the following equation:

These examples illustrate the ease with which the amounts of substances involved in a chemical reaction of known stoichiometry may be related. Directly measuring numbers of atoms and molecules is, however, not an easy task, and the practical application of stoichiometry requires that we use the more readily measured property of mass.

Relating Masses of Reactants and Products What mass of sodium hydroxide, NaOH, would be required to produce 16 g of the antacid milk of magnesia [magnesium hydroxide, Mg(OH)2] by the following reaction?

Solution The approach used previously in (Figure) and (Figure) is likewise used here; that is, we must derive an appropriate stoichiometric factor from the balanced chemical equation and use it to relate the amounts of the two substances of interest. In this case, however, masses (not molar amounts) are provided and requested, so additional steps of the sort learned in the previous chapter are required. The calculations required are outlined in this flowchart:

Check Your Learning What mass of gallium oxide, Ga2O3, can be prepared from 29.0 g of gallium metal? The equation for the reaction is

Relating Masses of Reactants What mass of oxygen gas, O2, from the air is consumed in the combustion of 702 g of octane, C8H18, one of the principal components of gasoline?

Solution The approach required here is the same as for the (Figure), differing only in that the provided and requested masses are both for reactant species.

Check Your Learning What mass of CO is required to react with 25.13 g of Fe2O3 according to the equation

These examples illustrate just a few instances of reaction stoichiometry calculations. Numerous variations on the beginning and ending computational steps are possible depending upon what particular quantities are provided and sought (volumes, solution concentrations, and so forth). Regardless of the details, all these calculations share a common essential component: the use of stoichiometric factors derived from balanced chemical equations. (Figure) provides a general outline of the various computational steps associated with many reaction stoichiometry calculations.

The flowchart depicts the various computational steps involved in most reaction stoichiometry calculations. 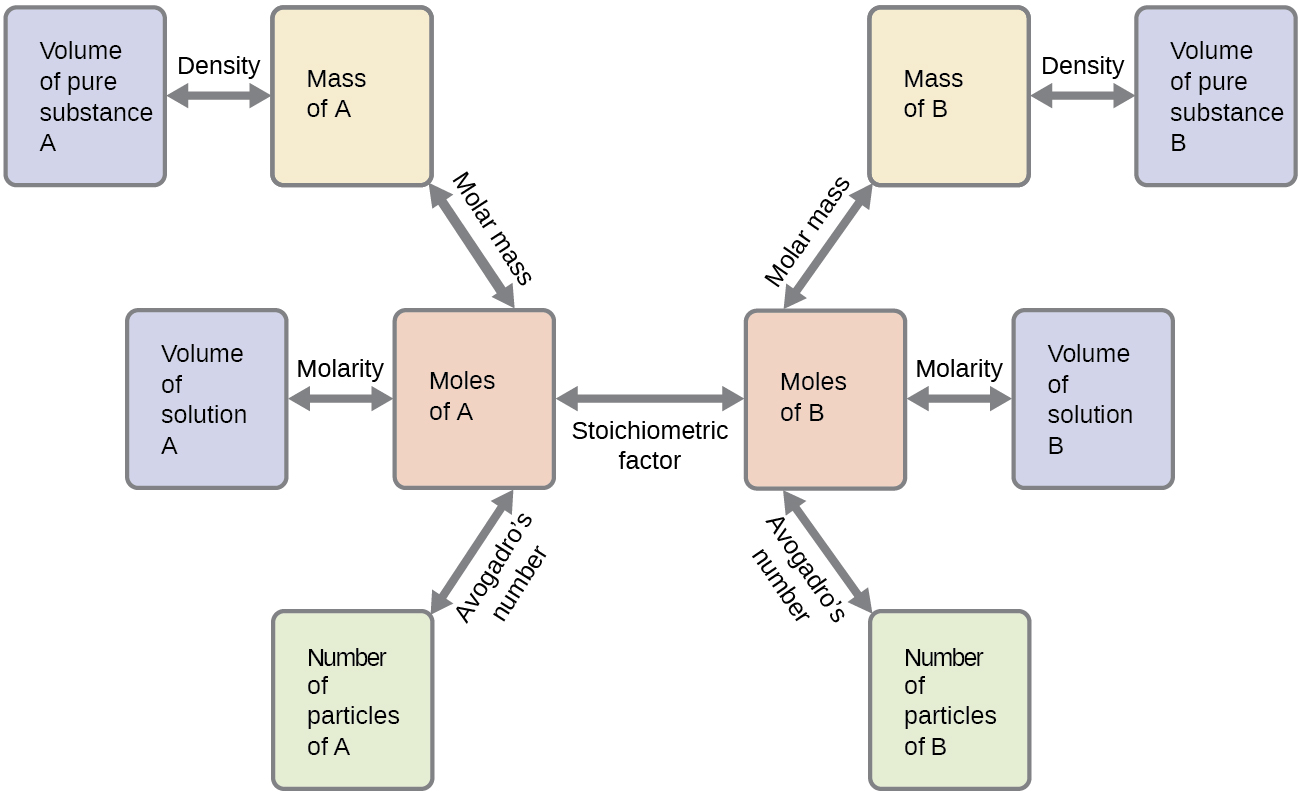 Airbags ((Figure)) are a safety feature provided in most automobiles since the 1990s. The effective operation of an airbag requires that it be rapidly inflated with an appropriate amount (volume) of gas when the vehicle is involved in a collision. This requirement is satisfied in many automotive airbag systems through use of explosive chemical reactions, one common choice being the decomposition of sodium azide, NaN3. When sensors in the vehicle detect a collision, an electrical current is passed through a carefully measured amount of NaN3 to initiate its decomposition:

This reaction is very rapid, generating gaseous nitrogen that can deploy and fully inflate a typical airbag in a fraction of a second (~0.03–0.1 s). Among many engineering considerations, the amount of sodium azide used must be appropriate for generating enough nitrogen gas to fully inflate the air bag and ensure its proper function. For example, a small mass (~100 g) of NaN3 will generate approximately 50 L of N2. 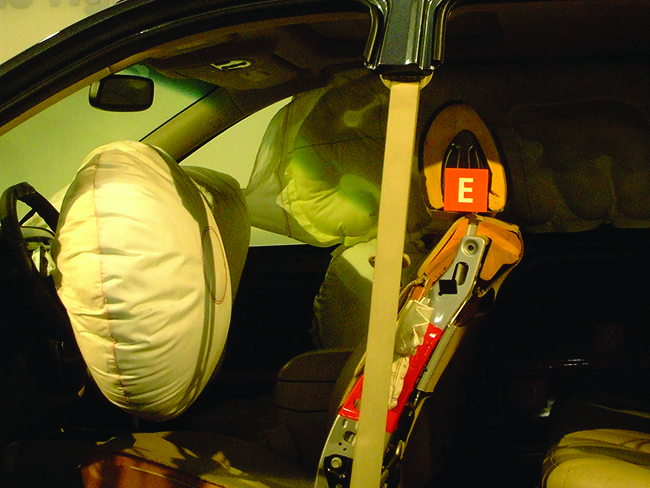 A balanced chemical equation may be used to describe a reaction’s stoichiometry (the relationships between amounts of reactants and products). Coefficients from the equation are used to derive stoichiometric factors that subsequently may be used for computations relating reactant and product masses, molar amounts, and other quantitative properties.

(a) The number of moles and the mass of chlorine, Cl2, required to react with 10.0 g of sodium metal, Na, to produce sodium chloride, NaCl.

(b) The number of moles and the mass of oxygen formed by the decomposition of 1.252 g of mercury(II) oxide.

(c) The number of moles and the mass of sodium nitrate, NaNO3, required to produce 128 g of oxygen. (NaNO2 is the other product.)

(d) The number of moles and the mass of carbon dioxide formed by the combustion of 20.0 kg of carbon in an excess of oxygen.

(e) The number of moles and the mass of copper(II) carbonate needed to produce 1.500 kg of copper(II) oxide. (CO2 is the other product.)

2. Determine the number of moles and the mass requested for each reaction in (Figure).

3. Write the balanced equation, then outline the steps necessary to determine the information requested in each of the following:

(a) The number of moles and the mass of Mg required to react with 5.00 g of HCl and produce MgCl2 and H2.

(b) The number of moles and the mass of oxygen formed by the decomposition of 1.252 g of silver(I) oxide.

(c) The number of moles and the mass of magnesium carbonate, MgCO3, required to produce 283 g of carbon dioxide. (MgO is the other product.)

(d) The number of moles and the mass of water formed by the combustion of 20.0 kg of acetylene, C2H2, in an excess of oxygen.

(e) The number of moles and the mass of barium peroxide, BaO2, needed to produce 2.500 kg of barium oxide, BaO (O2 is the other product.)

4. Determine the number of moles and the mass requested for each reaction in (Figure).

(a) Outline the steps necessary to determine the number of moles and mass of H2.

(b) Perform the calculations outlined.

6. Gallium chloride is formed by the reaction of 2.6 L of a 1.44 M solution of HCl according to the following equation:

(a) Outline the steps necessary to determine the number of moles and mass of gallium chloride.

(b) Perform the calculations outlined.

7. I2 is produced by the reaction of 0.4235 mol of CuCl2 according to the following equation:

(a) How many molecules of I2 are produced?

8. Silver is often extracted from ores such as K[Ag(CN)2] and then recovered by the reaction

10. Carborundum is silicon carbide, SiC, a very hard material used as an abrasive on sandpaper and in other applications. It is prepared by the reaction of pure sand, SiO2, with carbon at high temperature. Carbon monoxide, CO, is the other product of this reaction. Write the balanced equation for the reaction, and calculate how much SiO2 is required to produce 3.00 kg of SiC.

13. Urea, CO(NH2)2, is manufactured on a large scale for use in producing urea-formaldehyde plastics and as a fertilizer. What is the maximum mass of urea that can be manufactured from the CO2 produced by combustion of

of carbon followed by the reaction?

14. In an accident, a solution containing 2.5 kg of nitric acid was spilled. Two kilograms of Na2CO3 was quickly spread on the area and CO2 was released by the reaction. Was sufficient Na2CO3 used to neutralize all of the acid?

16. What volume of 0.750 M hydrochloric acid solution can be prepared from the HCl produced by the reaction of 25.0 g of NaCl with excess sulfuric acid?

18. A mordant is a substance that combines with a dye to produce a stable fixed color in a dyed fabric. Calcium acetate is used as a mordant. It is prepared by the reaction of acetic acid with calcium hydroxide.

stoichiometric factor
ratio of coefficients in a balanced chemical equation, used in computations relating amounts of reactants and products