There are many technological products associated with the past two centuries of electrochemistry research, none more immediately obvious than the battery. A battery is a galvanic cell that has been specially designed and constructed in a way that best suits its intended use a source of electrical power for specific applications. Among the first successful batteries was the Daniell cell, which relied on the spontaneous oxidation of zinc by copper(II) ions ((Figure)):

Illustration of a Daniell cell taken from a 1904 journal publication (left) along with a simplified illustration depicting the electrochemistry of the cell (right). The 1904 design used a porous clay pot to both contain one of the half-cell’s content and to serve as a salt bridge to the other half-cell. 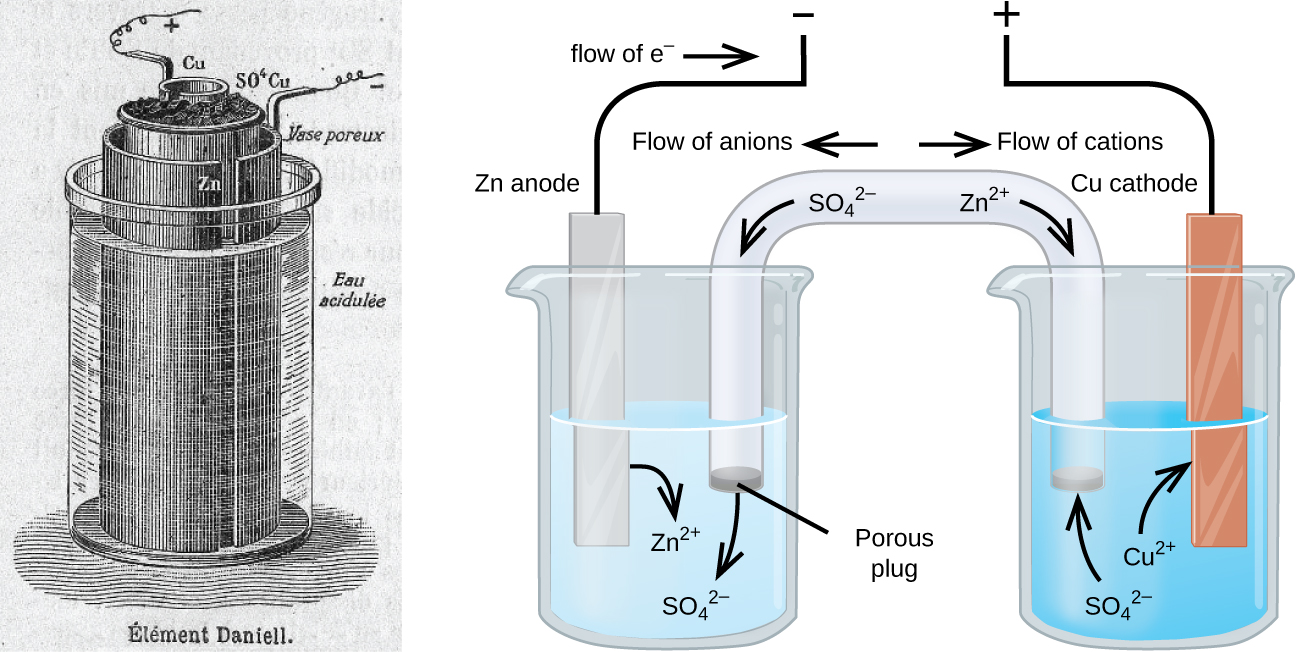 Modern batteries exist in a multitude of forms to accommodate various applications, from tiny button batteries that provide the modest power needs of a wristwatch to the very large batteries used to supply backup energy to municipal power grids. Some batteries are designed for single-use applications and cannot be recharged (primary cells), while others are based on conveniently reversible cell reactions that allow recharging by an external power source (secondary cells). This section will provide a summary of the basic electrochemical aspects of several batteries familiar to most consumers, and will introduce a related electrochemical device called a fuel cell that can offer improved performance in certain applications.

Visit this site to learn more about batteries.

A common primary battery is the dry cell, which uses a zinc can as both container and anode (“–” terminal) and a graphite rod as the cathode (“+” terminal). The Zn can is filled with an electrolyte paste containing manganese(IV) oxide, zinc(II) chloride, ammonium chloride, and water. A graphite rod is immersed in the electrolyte paste to complete the cell. The spontaneous cell reaction involves the oxidation of zinc:

and the reduction of manganese(IV)

which together yield the cell reaction:

The voltage (cell potential) of a dry cell is approximately 1.5 V. Dry cells are available in various sizes (e.g., D, C, AA, AAA). All sizes of dry cells comprise the same components, and so they exhibit the same voltage, but larger cells contain greater amounts of the redox reactants and therefore are capable of transferring correspondingly greater amounts of charge. Like other galvanic cells, dry cells may be connected in series to yield batteries with greater voltage outputs, if needed. 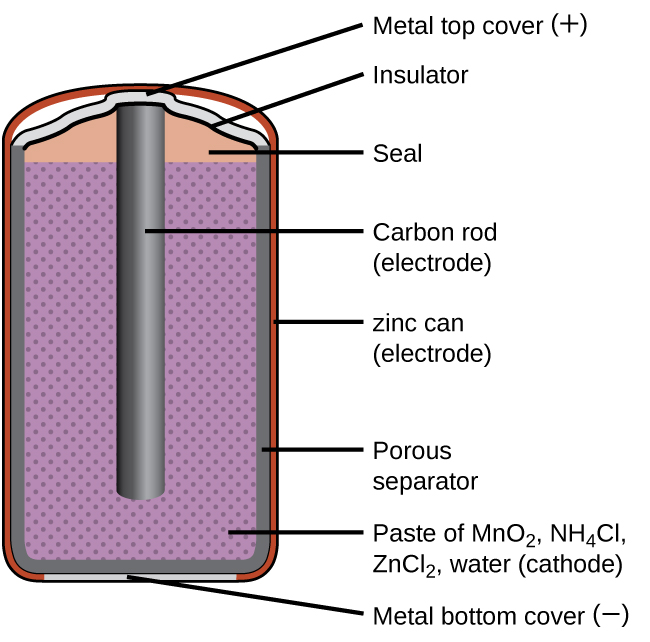 Visit this site to learn more about zinc-carbon batteries.

Alkaline batteries ((Figure)) were developed in the 1950s to improve on the performance of the dry cell, and they were designed around the same redox couples. As their name suggests, these types of batteries use alkaline electrolytes, often potassium hydroxide. The reactions are 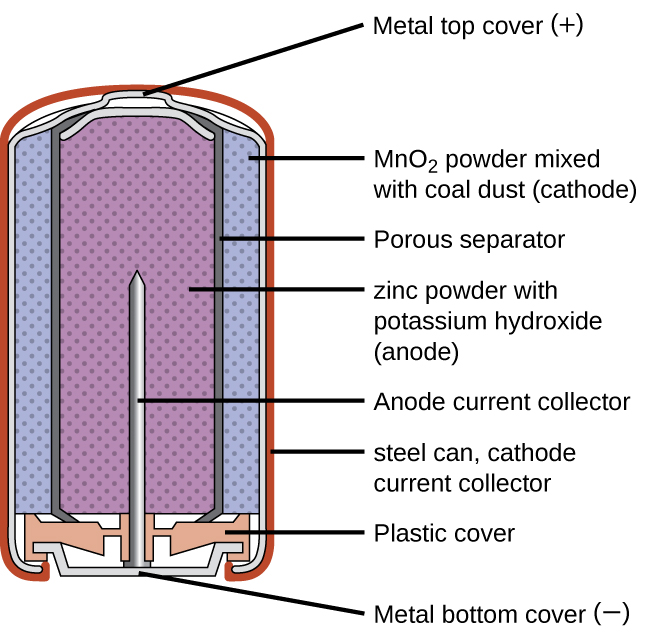 Visit this site to learn more about alkaline batteries.

Nickel-cadmium, or NiCd, batteries ((Figure)) consist of a nickel-plated cathode, cadmium-plated anode, and a potassium hydroxide electrode. The positive and negative plates, which are prevented from shorting by the separator, are rolled together and put into the case. This is a “jelly-roll” design and allows the NiCd cell to deliver much more current than a similar-sized alkaline battery. The reactions are

When properly treated, a NiCd battery can be recharged about 1000 times. Cadmium is a toxic heavy metal so NiCd batteries should never be ruptured or incinerated, and they should be disposed of in accordance with relevant toxic waste guidelines.

NiCd batteries use a “jelly-roll” design that significantly increases the amount of current the battery can deliver as compared to a similar-sized alkaline battery. 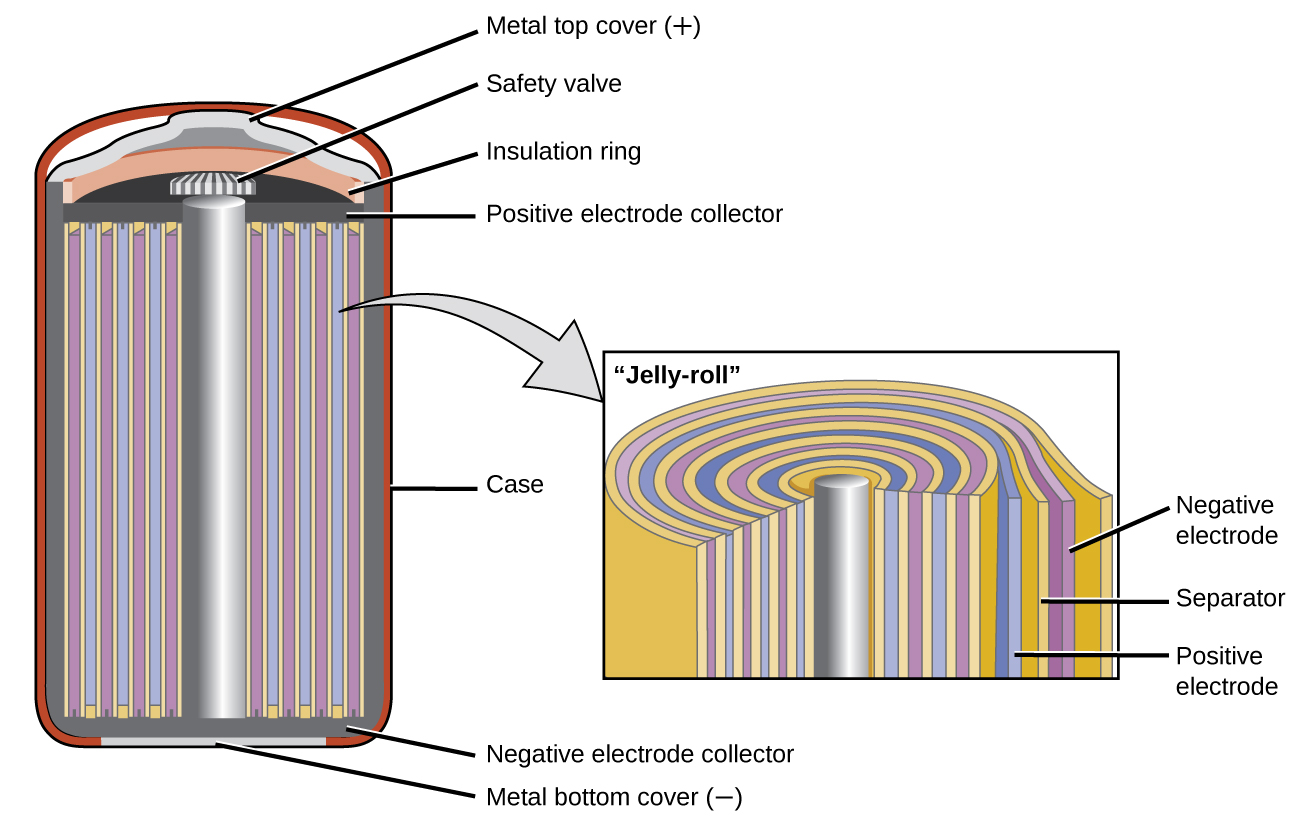 Lithium ion batteries ((Figure)) are among the most popular rechargeable batteries and are used in many portable electronic devices. The reactions are

The variable stoichiometry of the cell reaction leads to variation in cell voltages, but for typical conditions, x is usually no more than 0.5 and the cell voltage is approximately 3.7 V. Lithium batteries are popular because they can provide a large amount current, are lighter than comparable batteries of other types, produce a nearly constant voltage as they discharge, and only slowly lose their charge when stored.

In a lithium ion battery, charge flows as the lithium ions are transferred between the anode and cathode.

Visit this site for more information about lithium ion batteries.

Each cell produces 2 V, so six cells are connected in series to produce a 12-V car battery. Lead acid batteries are heavy and contain a caustic liquid electrolyte, H2SO4(aq), but are often still the battery of choice because of their high current density. Since these batteries contain a significant amount of lead, they must always be disposed of properly.

The lead acid battery in your automobile consists of six cells connected in series to give 12 V. 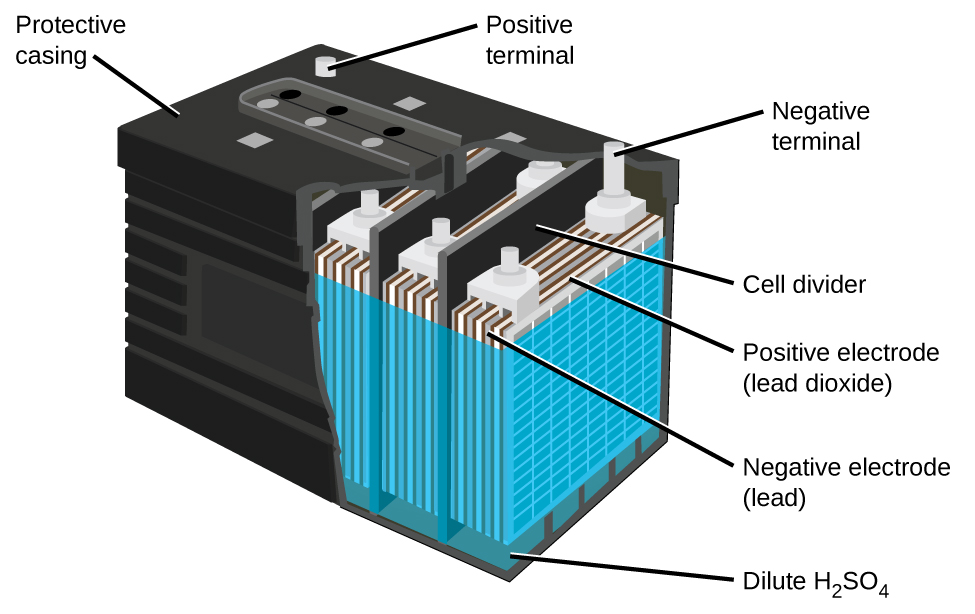 Visit this site for more information about lead acid batteries.

A fuel cell is a galvanic cell that uses traditional combustive fuels, most often hydrogen or methane, that are continuously fed into the cell along with an oxidant. (An alternative, but not very popular, name for a fuel cell is a flow battery.) Within the cell, fuel and oxidant undergo the same redox chemistry as when they are combusted, but via a catalyzed electrochemical that is significantly more efficient. For example, a typical hydrogen fuel cell uses graphite electrodes embedded with platinum-based catalysts to accelerate the two half-cell reactions:

In this hydrogen fuel cell, oxygen from the air reacts with hydrogen, producing water and electricity. 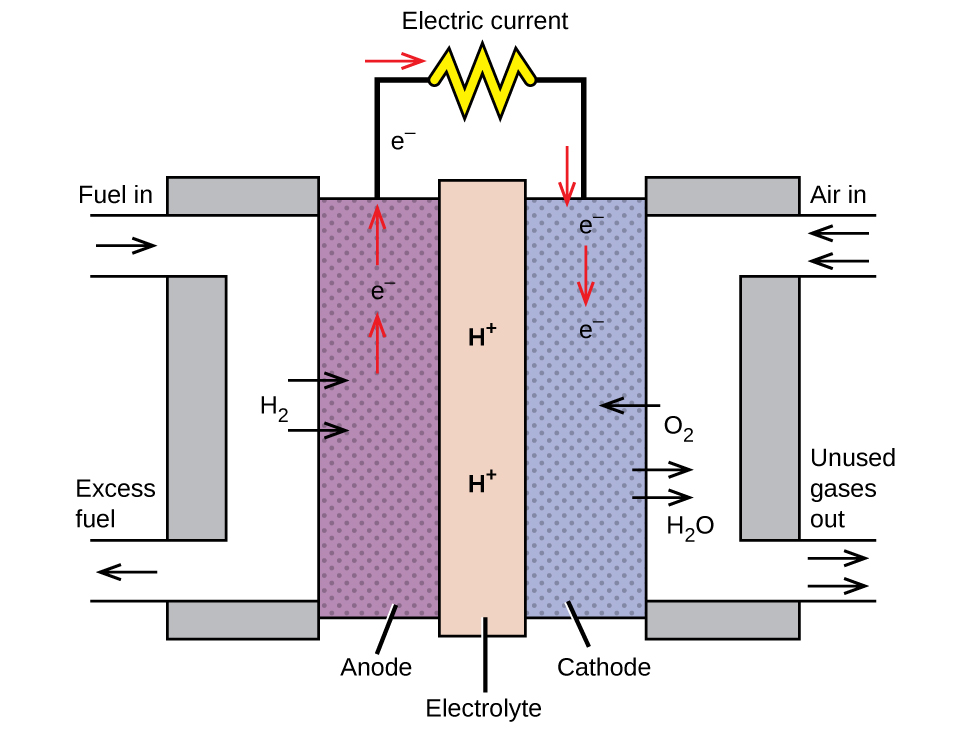 These types of fuel cells generally produce voltages of approximately 1.2 V. Compared to an internal combustion engine, the energy efficiency of a fuel cell using the same redox reaction is typically more than double (~20%–25% for an engine versus ~50%–75% for a fuel cell). Hydrogen fuel cells are commonly used on extended space missions, and prototypes for personal vehicles have been developed, though the technology remains relatively immature.

Check out this link to learn more about fuel cells.

Galvanic cells designed specifically to function as electrical power supplies are called batteries. A variety of both single-use batteries (primary cells) and rechargeable batteries (secondary cells) are commercially available to serve a variety of applications, with important specifications including voltage, size, and lifetime. Fuel cells, sometimes called flow batteries, are devices that harness the energy of spontaneous redox reactions normally associated with combustion processes. Like batteries, fuel cells enable the reaction’s electron transfer via an external circuit, but they require continuous input of the redox reactants (fuel and oxidant) from an external reservoir. Fuel cells are typically much more efficient in converting the energy released by the reaction to useful work in comparison to internal combustion engines.

(a) What is the standard cell potential for the battery?

(b) What are the reactions at the anode, cathode, and the overall reaction?

(c) Most devices designed to use dry-cell batteries can operate between 1.0 and 1.5 V. Could this cell be used to make a battery that could replace a dry-cell battery? Why or why not.

(d) Suppose sulfuric acid is added to the half-cell with the lead electrode and some PbSO4(s) forms. Would the cell potential increase, decrease, or remain the same?

2. Consider a battery with the overall reaction:

(a) What is the reaction at the anode and cathode?

(b) A battery is “dead” when its cell potential is zero. What is the value of Q when this battery is dead?

3. Why do batteries go dead, but fuel cells do not?

Batteries are self-contained and have a limited supply of reagents to expend before going dead. Alternatively, battery reaction byproducts accumulate and interfere with the reaction. Because a fuel cell is constantly resupplied with reactants and products are expelled, it can continue to function as long as reagents are supplied.

4. Use the Nernst equation to explain the drop in voltage observed for some batteries as they discharge.

Ecell, as described in the Nernst equation, has a term that is directly proportional to temperature. At low temperatures, this term is decreased, resulting in a lower cell voltage provided by the battery to the device—the same effect as a battery running dead.

alkaline battery
primary battery similar to a dry cell that uses an alkaline (often potassium hydroxide) electrolyte; designed to be an improved replacement for the dry cell, but with more energy storage and less electrolyte leakage than typical dry cell

dry cell
primary battery, also called a zinc-carbon battery, based on the spontaneous oxidation of zinc by manganese(IV)

primary cell
nonrechargeable battery, suitable for single use only