Types of Particles in Nuclear Reactions

Many entities can be involved in nuclear reactions. The most common are protons, neutrons, alpha particles, beta particles, positrons, and gamma rays, as shown in (Figure). Protons

are the constituents of atomic nuclei, and have been described previously. Alpha particles

are positively charged electrons (“anti-electrons”). The subscripts and superscripts are necessary for balancing nuclear equations, but are usually optional in other circumstances. For example, an alpha particle is a helium nucleus (He) with a charge of +2 and a mass number of 4, so it is symbolized

This works because, in general, the ion charge is not important in the balancing of nuclear equations.

Although many species are encountered in nuclear reactions, this table summarizes the names, symbols, representations, and descriptions of the most common of these. 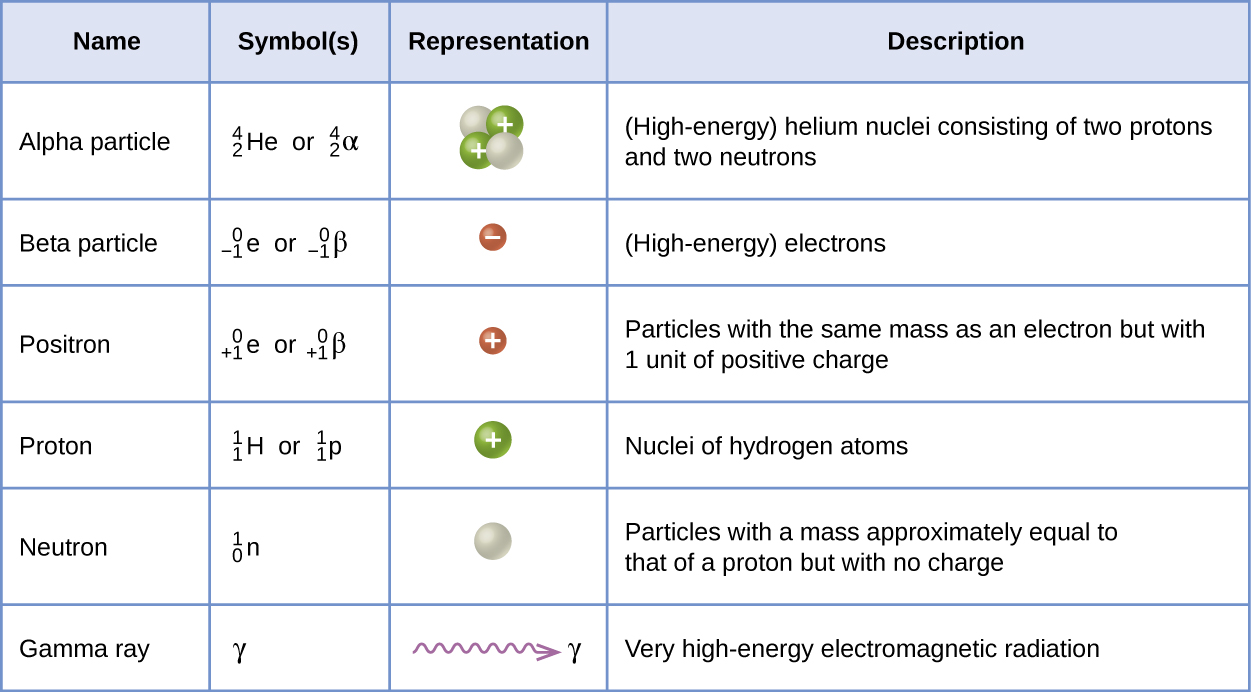 Note that positrons are exactly like electrons, except they have the opposite charge. They are the most common example of antimatter, particles with the same mass but the opposite state of another property (for example, charge) than ordinary matter. When antimatter encounters ordinary matter, both are annihilated and their mass is converted into energy in the form of gamma rays (γ)—and other much smaller subnuclear particles, which are beyond the scope of this chapter—according to the mass-energy equivalence equation E = mc2, seen in the preceding section. For example, when a positron and an electron collide, both are annihilated and two gamma ray photons are created:

A balanced chemical reaction equation reflects the fact that during a chemical reaction, bonds break and form, and atoms are rearranged, but the total numbers of atoms of each element are conserved and do not change. A balanced nuclear reaction equation indicates that there is a rearrangement during a nuclear reaction, but of nucleons (subatomic particles within the atoms’ nuclei) rather than atoms. Nuclear reactions also follow conservation laws, and they are balanced in two ways:

If the atomic number and the mass number of all but one of the particles in a nuclear reaction are known, we can identify the particle by balancing the reaction. For instance, we could determine that

is a product of the nuclear reaction of

if we knew that a proton,

was one of the two products. (Figure) shows how we can identify a nuclide by balancing the nuclear reaction.

produces a proton and a nuclide of another element. Identify the new nuclide produced.

Solution The nuclear reaction can be written as:

Similarly, the charges must balance, so:

Check the periodic table: The element with nuclear charge = +13 is aluminum. Thus, the product is

combines with an electron and produces a new nucleus and no other massive particles. What is the equation for this reaction?

Following are the equations of several nuclear reactions that have important roles in the history of nuclear chemistry:

1. Write a brief description or definition of each of the following:

(a) A nucleon is any particle contained in the nucleus of the atom, so it can refer to protons and neutrons. (b) An α particle is one product of natural radioactivity and is the nucleus of a helium atom. (c) A β particle is a product of natural radioactivity and is a high-speed electron. (d) A positron is a particle with the same mass as an electron but with a positive charge. (e) Gamma rays compose electromagnetic radiation of high energy and short wavelength. (f) Nuclide is a term used when referring to a single type of nucleus. (g) The mass number is the sum of the number of protons and the number of neutrons in an element. (h) The atomic number is the number of protons in the nucleus of an element.

2. Which of the various particles (α particles, β particles, and so on) that may be produced in a nuclear reaction are actually nuclei?

3. Complete each of the following equations by adding the missing species:

4. Complete each of the following equations:

5. Write a balanced equation for each of the following nuclear reactions:

(a) the production of 17O from 14N by α particle bombardment

(b) the production of 14C from 14N by neutron bombardment

(c) the production of 233Th from 232Th by neutron bombardment

6. Technetium-99 is prepared from 98Mo. Molybdenum-98 combines with a neutron to give molybdenum-99, an unstable isotope that emits a β particle to yield an excited form of technetium-99, represented as 99Tc*. This excited nucleus relaxes to the ground state, represented as 99Tc, by emitting a γ ray. The ground state of 99Tc then emits a β particle. Write the equations for each of these nuclear reactions.

(a) Calculate its binding energy per atom in millions of electron volts.

(b) Calculate its binding energy per nucleon.

nuclear reaction
change to a nucleus resulting in changes in the atomic number, mass number, or energy state

antiparticle to the electron; it has identical properties to an electron, except for having the opposite (positive) charge